Leslie was born on May 20, 1921 in Southwold Ontario as the son of Leslie Jewell (deceased) and Gladys Hill, of Southwold. He was a member of the Oneida Indian Reserve there. Leslie was born on a white father and an Indian mother and at the age of four he was brought to this same Reserve and was adopted by Joseph and Mary Elm.
He was married on July 23 1940 in this Reserve with Doreen Elm, of Southwold, They had a son Roderick Jacob Powless Elm and a daughter Claudine Elm (both from the the same Reserve no 2 too). His brothers were Theodore and Kenneth Jewell (both also in the army overseas).
He was a farmer and member of the Church of England. He liked sports as lacrosse, hockey, basketball, soccer, softball and running.
He enlisted on March 17 1943 in Huntingdon Quebec and he went overseas to the UK on June 24 1944 and he went thereafter to France on July 18.
Leslie died of wounds on Wednesday August 16 age 23 in the D Coy near Falaise and he was temporarily buried in St Germain de la Blanche Herbe and reburied on January 24 1945 in Beny S/Mer.
At his headstone: GREATER LOVE HATH NO MAN THAN THIS ST. JOHN XV.13
His medals were: 1939-45 Star; France Germany Star; War Medal; CVSM & Clasp 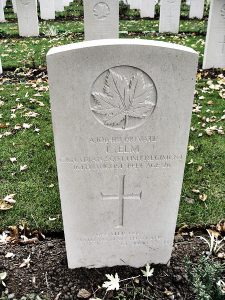