Leslie was born on July 7, 1923 in Michel, British Columbia as the son of John and Mary Jenkinson, of Michel (both English). His parents were married on Aril 26 1921 in Nanaimo British Columbia. His brother was Henry Alvin Jenkinson and his sisters were Mrs. Thomasina Kyne, Mrs. Germaine Elischuk, Mary, Francis and Joanna Jenkinson. His aunt was Ms. Frances Sanders.
He was an electrical apprentice and he was member of the Church of England.
He enlisted on October 6, 1941 in Michel and he went overseas to the UK on March 29 1942 and he went thereafter to France for the D-Day landing.
Leslie was killed in action on this Tuesday June 6 1944 age 20 in the B Coy during this landing on the beaches of Normandy. He was temporarily buried near Graye S/Mer and reburied on December 13 1944 in Beny S/ Mer.
At his headstone: WITHOUT FAREWELL HE FELL ASLEEP LEAVING SWEET MEMORIES FOR US TO KEEP
His Medals were; 1939-45 Star; France Germany Star; Defence Medal; War Medal; CVSM & Clasp. 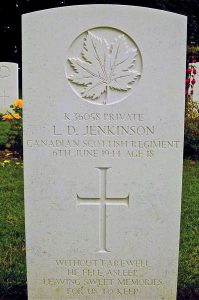