Leslie was born on July 2 1920 in Chilliwack British Columbia, the son of Matthew J. F. (Irish and deceased) and Mae Caroline Wray , of Chilliwack.  Mae remarried later as Mrs. Griffin. He was married on October 13 1943 with Anna Marie Wray Smith. They had three daughters: Gail Marie, Cheri Laverne and Carolyn Alberta Wray and one son Herbert Cecil Wray. Anna remarried later as Mrs. Knutsen. He had two brothers: Robert and Alfred Wray and one sister Florence Mae Wray.
He was a logger and truck driver and member of the Church of England.
He enlisted on November 19 1943 in Calgary and went on June 3 1944 to the UK  and he embarked France on July 23. He was taken on strength to the 1 Bn Canadian Scottish Regiment on July 28 1944.
Leslie died of wounds on Saturday October 7 1944 age 24 in the B Coy near the Leopold Canal in Belgium and he was temporarily buried in Eeklo near a convent and on May 23 1945 reburied in Adegem.
On his headstone: Though far from home My beloved son rests in peace With his buddies
His medals were: 1939-45 Star; France Germany Star; War Medal; CVSM & Clasp. 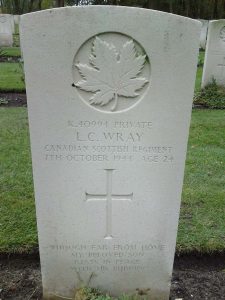