Leonard was born on September 2 1922 in Ile D’Anticosti Quebec as the son of Abraham Rodgers and Mrs. Mathilda Rodgers-Bezeault (both French Canadian), of Shelter Bay, Saguenay Co., Province of Quebec. He had two brothers, Joseph and Aimé Rodgers and one sister Flora Lemond-Rodgers.
He was a journalier and member of the Roman Catholic Church. He spoke French and his hobby was reading novels.
He enlisted on September 1 1942 in Quebec and went overseas to the UK on July 19 1944 and disembarked NW Europe on January 29 1945.
He was taken on strength on February 26 1945 from Le regiment de Maisonneuve to the 1Bn Canadian Scottish Regiment and was wounded on the same day during the battle of the Rhineland Germany. And he died of wounds whilst POW on Monday March 5 1945 age 22 and place unknown.
His medals were: 1939-45 Star; France Germany Star; Defence Medal; War Medal; CVSM & Clasp. 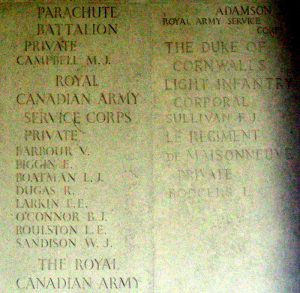