Lawrence was born on July 15 1924 in Provost Alberta as the son of James L. (deceased) and Flossie May McCafferty, of New Albany, Annapolis Co., Nova Scotia.
He was a labourer on a sawmill and member of the United Church of Canada.
He enlisted on August 1 1942 in Edmonton and he went on December 5 1944 overseas to the UK and he went thereafter on February 17 1945 to NW Europe.
Lawrence was killed in action on Wednesday March 28 age 20 in the B Coy near Emmerich Germany during the battle of the Rhineland and he was temporarily buried in Vrasselt Germany and he was then on February 13 1946 reburied in Groesbeek.
At his headstone: ASLEEP IN JESUS, BLESSED SLEEP, FROM WHICH NONE EVER WAKES TO WEEP
His medals were: 1939-45 Star; France Germany Star; War Medal; CVSM & Clasp. 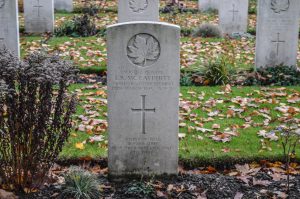