He was first missed during the first attack on April 21 1945 of the liberation of Wagenborgen but later appeared that he became a POW, and he was serious wounded transported by boat over the Dollard to Emden Germany.

John died of these wounds on Monday April 23 age 37 in a hospital there. He was temporarily buried in Emden en on March 12 1946 reburied in Holten.

At his headstone: THERE IS A LINK DEATH CANNOT SEVER LOVE AND REMEMBRANCE LIVE FOR EVER 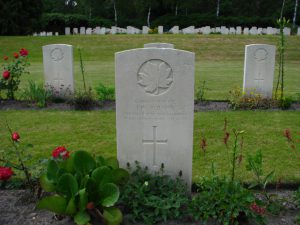