John was born on January 6 1918 in Vancouver as the son of Theodore
(deceased in 1935) and Matilda Dames-Gonsalves ( Latvia), of Vancouver. He was the husband of Marjorie May Dames-Collinge, of Vancouver. They were married on June 30 1938 in Vancouver and they had one daughter Marjorie Louise Dames. Marjorie remarried as Mrs. Miller after the war. He had one sister: May Matilda Pierce.
His profession was a merchant seaman and he was a member of the Presbyterian Church. He played a Spanish guitar and he was fond of classical music. His hobbies were hunting, fishing, seeing movies and reading.

He enlisted on February 3 1942 in Vancouver and he went overseas to the UK on September 1 1943.
John took part of the landing on June 6 1944 at the beaches of Normandy and he was seriously wounded thereafter on August 8 and he died therefore on Thursday August 17 1944 age 26 and he was buried on August 18 in Bayeux.
At his headstone: FONDLY LOVED AND DEEPLY MOURNED BY HIS WIFE AND FAMILY
His medals were: 1939-45 Star; France Germany Star; Defence Medal; War Medal; CVSM & Clasp. 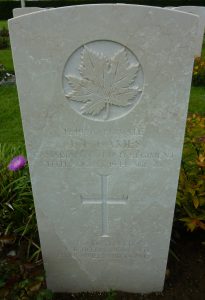