John was born on January 5 1916 as the son of Daniel William and Flora (deceased in 1922) Patrick in the farming community of Indian Head, Saskatchewan.

John was killed in action on Saturday April 21 1945 age 29  during the first attack of the l i b e r a t i o n of Wagenborgen. He was temporarily buried in Siddeburen and on February 15 1946 reburied in Holten. 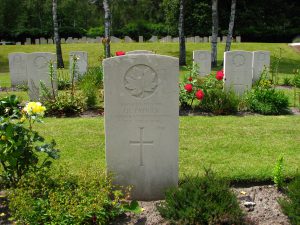