John was born on August 21 1916 in Pierson Manitoba as the son of George (English) and Mary Ann Storey, of Pierson. His parents were married in 1915 in Melita Manitoba. His brothers were Robert (also Canadian Army overseas), Francis Ernest, Maurice Allan Storey and his half-brothers were Samuel James and George Frederick Storey. His half-sisters were Mrs. Mary Emma and Mrs. Isobella Eleanor.
He was a farmer and member of the Church of England.
He enlisted on April 20 1943 in Sydney Nova Scotia and he went overseas to the UK on December 1 1943 and he went thereafter on July 3 1944 as late serial to France.
John was killed in action on Saturday August 12 age 27 near Falaise and he was temporarily buried in Mondeville and reburied on April 17 1945 in Bretteville S/Laize.
His medals were: 1939-45 Star; France Germany Star; Defence Medal; War Medal; CVSM & Clasp. 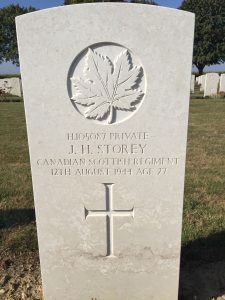