John was born on April 3, 1896 in Moose Jaw, Saskatchewan, the son of Robert S. and Mary E. Stewart, of Moose Jaw (both deceased). His parents were married on November 6 1878 in Granby Quebec. His brothers were: William S., Charles A. and Fernando Stewart. And his sisters were: Ada Maria ( executor of his last will) and Mary L. Stewart and Lucia Noble.
His profession was a sheet metal shearman and he was member of the United Church.
He enlisted on July 28 1941 (45 years) in Vancouver and he went on September 4 1941 overseas to the UK  and he was attached to the Royal Winnipeg Rifles. He was a veteran of WW 1 too from 1916-1918.
John was killed in action on Tuesday June 6 1944 age 48 in the C Coy in the first assault during D-Day at the beaches of Normandy. He was temporarily buried at Lantheville churchyard before being reburied on July 28 1945 in Bretteville S/Laize.
On his headstone: EVER REMEMBERED BY HIS BROTHERS AND SISTERS
His medals were: 1939-45 Star; France Germany Star; Defence Medal; War Medal; CVSM & Clasp. 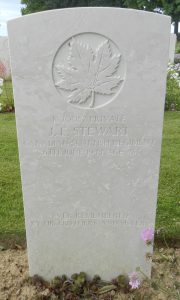