John was born on November 26 1925 in Kuskie Idaho USA as the son of Edward Lee and Goldia Violet Cook (both Americans), of Grand Forks, British Columbia. His brothers were Howard E. (also in the army overseas) , Martin H. and Garfield Cook. His sisters were Mrs. Audrey Neven, Mrs. B.L. Brown and Alberta, Phyllis G., Mary E., Shirley F. and Louise M. Cook. And sister Martha Lee Cook already died in 1924.
He was a farmer and member of the United Church.
He enlisted on June 29 1944 in Vancouver and he went overseas to the UK on February 9 1945 and disembarked NW Europe on April 11. His father has sent on October 1944 a written request to the army if John could come home to help with the work at home because his mother was invalid and waiting for an operation and he had to work too and to raise too his brother and sister and four young ones too. And his brother Howard was wounded in Italy and was recovering in Vancouver.
John died of wounds on Friday April 27 1945 age 19 in the C Coy near the Leda River during the battle of Leer (Germany) and he was temporarily buried in Meppen (Germany) and reburied on March 18 1946 in Holten.
At his headstone: A BELOVED SON AND BROTHER. “BLESSED ARE THE PURE IN HEART: FOR THEY SHALL SEE GOD”
His medals were: 1939-45 Star; France Germany Star; War Medal; CVSM & Clasp. 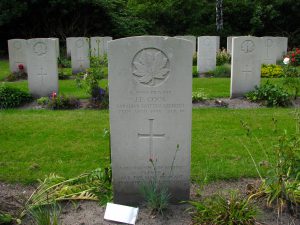