John was born on August 14 1922 in Colfax Saskatchewan as the son of William Stevenson Addie and Maude Addie nee Donaldson (deceased) and both Scottish, of Regina. His parents were married on January 1 1914 in Arcola Saskatchewan.
His brother was Lt Gordon V. Addie (in the army too) and sisters Mrs. Patricia Sidaway, Evelyn T. Addie and Sgt Mrs. Margaret Springett (in the army too). His best friend was John Smith.
His profession was a shipper and he was member of the United Church.
He enlisted on in July 30 1942 in Regina and he went overseas to the UK on June 18 1943 and he went thereafter to France on June 6 1944 for the D-Day landing.
John was killed in action on Wednesday June 21 age 21 in the C Coy during the battle of Rots Hamel and he was temporarily buried in le Hamel and he was reburied on February 5 1945 in Beny S/Mer.
At his headstone: FOND MEMORIES LINGER OF HAPPY TIMES TOGETHER WITH ONE WE LOVED AND ALWAYS SHALL REMEMBER
And his medals were: 1939-45 Star; France Germany Star; War Medal; CVSM & Clasp.

His name is at the monument  in Rots, Normandy. 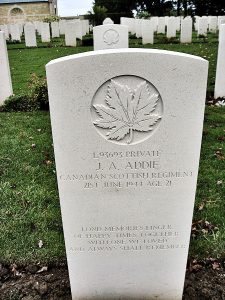