James was born on January 3, 1924 Fifshire, Scotland as the son of Alexander and Mary Ann Waugh nee Davidson of Montreal. His parents were married on November 28 1913 in Scotland. His brother was Wayne Livingstone (also in the army) and sister was Isabel Trudeau.
He was an electrician helper and member of the Church of England. His liked sports were hockey and swimming and his hobby was reading historical books.
He enlisted on April 29 1943 in Montreal South and he went overseas to the UK on December 2 1943 and he went thereafter on June 6 1944 as reinforcement to France during the D-Day landing.
James died of wounds on Sunday July 9 age 20 in the B Coy near Cussy and he was temporarily buried near the road of Crepon Bayeux Bazenville and he was reburied on March 8 1945 in Beny S/Mer.
And his medals were: 1939-45 Star; France Germany Star; Defence Medal; War Medal; CVSM & Clasp.
He served first with the Canadian Scottish Regiment and the Stormond & Dundas Glengarry Highlanders. 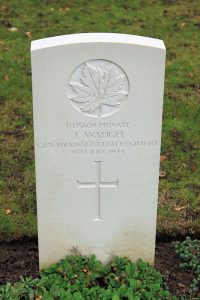