James was born on November 5 1923 in Vancouver as the son of George MacDonald Smart and Ethel Constance Smart (both English), of Vancouver. His parents were married on June 5 1920 in Vancouver. His brother was Douglas George Smart.
He was an accountant and member of the Church of England. He liked athletics, rugby, rowing, baseball, tennis and golf. He read historical books, biographies and mysteries and attended dances and movies.
He enlisted on May 22 1943 in Vancouver and he went on March 14 1944 overseas to the UK and he went thereafter as reinforcement on June 13 to France.
William died of wounds on Saturday July 8 age 20 in the B Coy near Cussy and he was temporarily buried there and reburied on February 6 1945 in Beny S/Mer.
At his headstone: PRO PATRIA MORI
His medals were: 1939-45 Star; France Germany Star; War Medal; CVSM & Clasp. 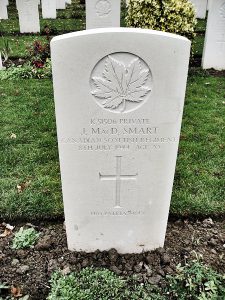