James was born on April 18 1921 in Selfkirk Ontario, the son of William Wesley Stewart (deceased in 1942) and Mary Maude Stewart of Nanticoke Ontario. He was married with Beatrice Norene Stewart, of Simcoe, Ontario. His brothers were: Ernest Hilbert, Russell Albert (Canadian army on Nova Scotia), George Omar and Walter Ross Stewart and his sisters: Anne May Stewart, Helen Jean Johnson and Mildred Lauretta Stewart. And his half-sisters were: Erie Jeanette Atkinson and Ethel Gertrude Hurst.
He was a labourer and  member of the Baptist Church.
He enlisted on November 1 1942 in Brantford Ontario and he went on March 14 1944 overseas to the UK  and he went June 6 1944 to France for D-Day  and he served in the first line reinforcement then.
James was killed in action on Friday June 9 age 23 in the D Coy near Putot-en-Bessin and he was temporarily buried there before being reburied on January 18 1945  in Bretteville S/Laize.
On his headstone: SUNSHINE FADES AND SHADOWS FALL BUT SWEET REMEMBRANCE OUTLASTS ALL
His medals were: 1939-45 Star; France Germany Star; War Medal; CVSM & Clasp.

His name is mentioned at the monument in Putot-en-Bessin in Normandy. 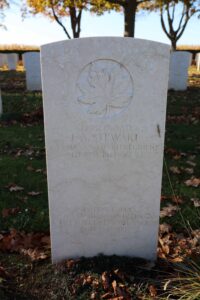