Ira was born on September 2 1924 in Birch Hill Saskatchewan as the son of William and Margaret McWilliams, of Prince Albert, Saskatchewan. His parents were married on July 18 1905 in Prince Albert.
His brother Gilbert McWilliams was already killed in action too on August 5 1943 age 22 in Italy and he was buried at the Agira Canadian War Cemetery D-C-422 (Sicily). His other brothers were Leo (overseas in the army), Stanley, (overseas in the army). Kinley, Melvin, Lloyd and Clifford McWilliams (also in the army). His sisters were Mrs. T.E. Smith, Ms. E. Hunt, Mrs. E. Bowie, Mrs. R. Hunt and Mrs. R. Tunderson.
He was a truck driver and mechanic and member of the Church of England. His hobbies were softball and hunting sometimes, shows, playing guitar and singing.
He enlisted on August 21 1943 in Vancouver and he went on March 15 1944 overseas to the UK and he went thereafter on June 9 as reinforcement to France.
Ira died of wounds on Tuesday August 15 1944 age 19 in the D Coy near Falaise and he was temporarily buried in Mondeville and reburied on April 25 1945 in Bretteville S/Laize.
At his headstone: ASLEEP IN JESUS. SADLY MISSED BY PARENTS AND FAMILY
His medals were: 1939-45 Star; France Germany Star; War Medal; CVSM & Clasp. 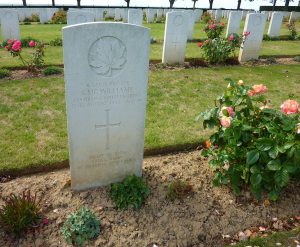