Hugh was born on September 14 1916 in Bellevue Alberta as the son of George Jack M. (deceased in 1941) and Mary McKean (both Scottish), of Winlaw, British Columbia. His parents were married on June 2 1913 in Coleman Alberta. His brother John McKean was in the army overseas too and his sisters were Annie Stevenson nee McKean and Lillian McKean.
His profession was CPR section hand and he was member of the Presbyterian Church. His hobbies were baseball, soccer and light reading.
He enlisted on July 12 1940 in Nelson British Columbia and he went overseas to the UK on April 19 1942.
Hugh was at the landing in the first wave on D-Day June 6 1944 and he was thereafter killed in action on Wednesday July 7 age 27 in the C Coy near Vieux Cairon/Caen. And he was temporarily buried in Neuf Mer in an orchard near house in Thaon and he was reburied on October 13 1945 in Bretteville S/Laize.
His medals were: 1939-45 Star; France Germany Star; Defence Medal; War Medal; CVSM & Clasp. 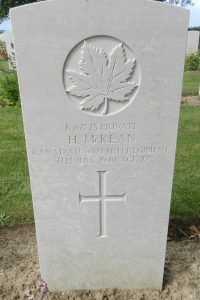