Hudson was born on January 16 1913 in Saint John New Brunswick as the son of Joseph and Victoria (deceased) Wallace, of Saint John. He was married on January 21 1935 in Saint John with Lillian Belle Wallace, of West Saint John. Their children were Douglas, Shirley, Florence, Laurence and Gerald Wallace. His sister was Mrs. R.L. Joyce.
He was a labourer and member of the Roman Catholic Church.
He enlisted on June 14 1940 in Saint John and he went on July 27 1944 overseas to the UK and he went thereafter on September 4 to France. He was seriously wounded in action on March 28 1945.
Hudson died of these wounds on Thursday March 29 age 32 in the D Coy near Emmerich Germany during the battle of the Rhineland. And he was temporarily buried near the Rosan Farm Germany and he was then on December 4 1945 reburied in Groesbeek.
At his headstone: ALWAYS REMEMBERED AND LOVED
His medals were: 1939-45 Star; France Germany Star; War Medal; CVSM & Clasp. 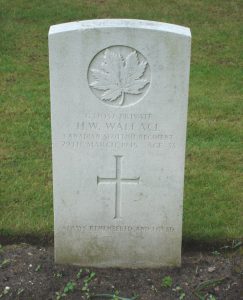