Herman was born on October 5 1919 in Gull Lake Saskatchewan as the son of William Robert (British and deceased in 1930) and of Alma Anna (German) Dilworth, of Pincher Creek, Alberta. They were married on January 1 1915 in Gull Lake. His brother was James Robert Dilworth of the Queen’s Own Cameron Highlanders of Canada, who was killed in action on September 13 1944 age 27 during the advance in Belgium and he is temporarily buried in de Panne near Dunkirque and he is reburied on June 6 1945 at the Canadian Cemetery Adegem Belgium grave 5-A-8. His sisters were Mrs. Anna May Lee, Emily Irene and Gladys Freda Dilworth.
He was a student and member of the United Church.
He enlisted on July 11 1940 in Vancouver and he went on March 7 1941 overseas to the UK and he went thereafter on June 6 194 to France for the D-Day landing. He was wounded on July 26 and evacuated then to an English hospital and he disembarked France again on September 3.
Herman died of wounds on Tuesday December 12 1944 age 25. due to an accident with a bullit of a stengun in his abdomen by one of his army mates. And he was temporarily buried in Nijmegen and he was then on August 7 1945 reburied in Groesbeek.
At his headstone: GREATER LOVE HATH NO MAN THAN THIS, THAT A MAN LAY DOWN HIS LIFE FOR HIS FRIENDS
His medals were: 1939-45 Star; France Germany Star; Defence Medal; War Medal; CVSM & Clasp. 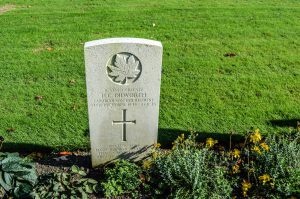