Harry was born on April 8 1912 in Glasgow Scotland as the son of Alex Mann MacPherson and Jane Bell MacPherson. His parents were married on July 10 1907 in Leith Scotland. He was married on May 2 1942 in Vancouver with Gwendolyn Eva MacPherson nee King, of Vancouver. Their daughter was Barbara Jean Elizabeth. His brother was James Alexander MacPherson and his sister Evelyn Annie Margaret Langford.
He was a sales clerk and member of the Presbyterian Church.
He enlisted on August 14 1943 in Vancouver and he went overseas to the UK on November 29 1944 and he went thereafter on December 30 to NW Europe. He was wounded in action on February 28 1945.
Harry was serious wounded on April 28 in the D Coy near Leer Germany and he died of wounds on Sunday April 29 age 33  and he was temporarily buried in Meppen (Germany) and reburied on March 18 1946 in Holten.
At his headstone: IN FONDEST MEMORY. YOUR LOVING WIFE AND DAUGHTER, PARENTS, BROTHER AND SISTER
His medals were: 1939-45 Star; France Germany Star; War Medal; CVSM & Clasp. 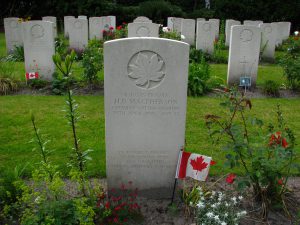