Harold was born on August 25 1922 in Corbetton Ontario as the son of James Daniel and Margaret (deceased in 1929) Whitten, of Corbetton. They were married on April 9 1920. He was the brother of Fredrick Gordon, Clifford and Dorothy Whitten.
He was a farmer and member of the United Church. His hobby was to make model airplanes and he took active part in all sports.
He enlisted on October 4 1943 in Gander Newfoundland and he went on July 19 1944 overseas to the UK and he went thereafter on October 17 to Belgium.
Harold was killed in action on Sunday February 18 1945 age 22 in the C Coy at the Moyland Wood during the battle of the Rhineland. And he was temporarily buried in Bedburg Hau Germany and he was then on September 13 1945 reburied in Groesbeek.
At his headstone: BELOVED SON OF JAMES AND MARGARET, BROTHER OF FRED, CLIFFORD AND DOROTHY
His medals were: 1939-45 Star; France Germany Star; War Medal; CVSM & Clasp. 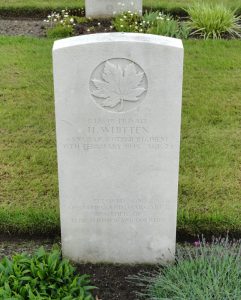