Harold was born on February 8 1917 in Digby Nova Scotia as the son of Robert and Nova Anna McGowan (both Scottish), of Weymouth, Digby Co., Nova Scotia. His parents were married in 1910 in Weymouth. His brothers were Stewart (also in the army) and Clarence MacGowan and his sisters were Mrs. Francis Landell and Winfred MacGowan.
He was a labourer and he was member of the Church of England. He played the mouth organ and accordion and he liked some sports and sometimes minor tailoring jobs.
He enlisted on April 11 1941 in Halifax Nova Scotia and he went overseas to the UK on May 7 1944 and he went thereafter to France on June 23 1944.
Harold was killed in action on Saturday July 15 age 27 in the B Coy near Caen and he was temporarily buried in Beny S/Mer and he was reburied on April 23 1945 there.
At his headstone: OF WEYMOUTH, NOVA SCOTIA. HAROLD, A LOVING SON. GONE BUT NOT FORGOTTEN. MAY HE REST IN PEACE
And his medals were:1939-45 Star; France Germany Star; War Medal; CVSM & Clasp. 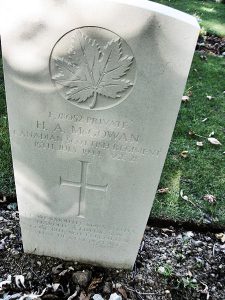