Gibson was born on July 24 1925 in Drumheller Alberta as the son of Daniel Hugh (deceased) and Sadie (Scottish) McFarlane, of Drumheller, Alberta.
He was a reamer and member of the Church of England.
He enlisted on March 8 1944 in Vancouver and he went on October 20 overseas to the UK and he went thereafter on January 31 1945 to NW Europe.
Gibson was killed in action on Wednesday March 28 age 19 in the C Coy near Emmerich Germany during the battle of the Rhineland. And he was temporarily buried in Vrasselt Germany and  then on February 13 1946 reburied in Groesbeek.
At his headstone: THE LORD IS MY LIGHT AND MY SALVATION” ONLY SLEEPING. IN GOD WE TRUST
His medals were: 1939-45 Star; France Germany Star; War Medal; CVSM & Clasp. 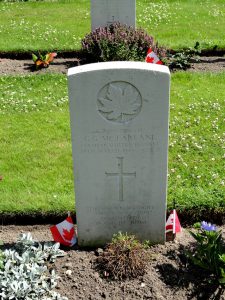