Gerard was born on May 5 1916 in Mont Louis, Gaspe Co., Province of Quebec as the son of Joseph and Adélia Minville Robinson (both deceased), of Mont Louis. His brothers were Omer (his next of kin) and Albert Robinson and his half-brother was Donat Lemieux. And his sisters were Alida Laflamme, Gracia and Julienne Mimeault and another sister Hilarion Robinson was already deceased.
He was a lumberman and member of the Roman Catholic Church. He liked outdoor sports, exercise and read a good deal.
He enlisted on June 8 1942 in Valcartier Quebec and he went on July 30 1944 overseas to the UK and he went thereafter on September 8 as reinforcement to France.
Gerard was killed in action on Friday October 13 1944 age 28 in the B Coy near the Leopold Canal in Belgium and he was temporarily buried in Maldegem and on July 17 1945 reburied in Adegem.
At his headstone: FROM MONT LOUIS, PROVINCE OF QUEBEC, CANADA
His medals were: Medal 1939-45; France Germany Medal, War medal; CVSM & Clasp. 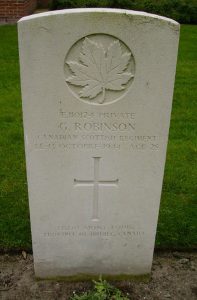