Gerald was born on June 7 1922 (but the real date is May 25 1925) in Woodstock Ontario as the son of Walter and Sarah Annie Mason, of Toronto.
He was a factory hand and he was a member of the United Church.
He enlisted on May 1 1942 in Toronto and they discovered after that that he was just 17 years and he was then discharged then but he was thereafter attested on October 6 1943 again for the army.
He went on August 10 1944 overseas to the UK and he went thereafter on September 8 to France.
Gerald was killed in action on Monday April 9 1945 age 19 in the D Coy during the battle of Deventer and he was temporarily buried in Oxe near Deventer and was reburied on December 17 1945 in Holten.
At his headstone: AWAY FROM HIS BIRTHPLACE AWAY FROM HIS KIN BEING TOO GOOD FOR EARTH HEAVEN VOWS TO KEEP HIM
His grave was adopted then by a then 17 years old girl from Holten.
His medals were: 1939-45 Star; France Germany Star; War Medal: CVSM & Clasp. 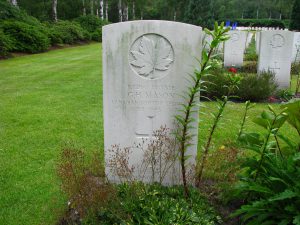