George was born on July 4 1921 in Melville Saskatchewan as the son of William (Scottish) and Annie (Polish) Robertson (both deceased). They were married in 1922 in Hattress Saskatchewan. He was brought up by his uncle and grandfather. His aunt Emily Allen was his next of kin and his uncle/foster father was William (Bill) Bert Roberts and aunt Gene Roberts.
He was a labourer and member of the United Church. He enjoyed playing baseball and liked swimming, skiing and he also read a little and preferred fiction.
He enlisted on January 13 1942 in Vancouver and he went on June 2 1944 overseas to the UK and he went thereafter on July 10 to France.
George was killed in action on Friday February 9 1945 age 23 in the B Coy at the Waal flats during the battle of the Rhineland. And he was temporarily buried in Nijmegen and he was then on August 2 1945 reburied in Groesbeek. His grave is after the war adopted by a Dutch citizen.
His medals were: 1939-45 Star; France Germany Star; War Medal; CVSM & Clasp. 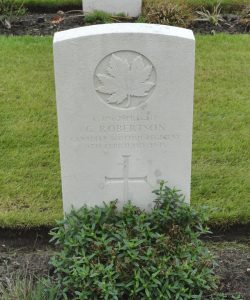