George was born on June 20 1913 in Pittsburgh USA as the son of William James Thomas and Alice Thomas (deceased), of Maynard’s Green, Sussex, England. His parents were married on October 5 1909 in Eastbourne England. His brothers were Reginald William (in the army too with the Indian Command) and Frederick Thomas and his sisters were Marjorie Herd nee Thomas (RAF in Creden Hill, Hereford England) and Alice Lillian Campbell nee Thomas from Eastbourne.
He was a cook and member of the Roman Catholic Church.
He enlisted on July 8 1940 in Vancouver and he went overseas to the UK on September 2 1941 and he went thereafter on June 6 1944 to France for the D-Day landing.
George was killed in action on Tuesday August 15 age 31 near Falaise and he was temporarily buried 2 km’s East of Soulangy and reburied on May 17 1945 in Bretteville S/Laize.
At his headstone: THIS LITTLE SPOT IN A FOREIGN LAND WILL BE FOR EVER ENGLAND. R.I.P. MOTHER
His medals were: 1939-45 Star; France Germany Star; Defence Medal; War Medal; CVSM & Clasp. 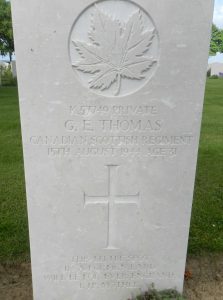