George was born on February 4 1925 in Blackie Alberta as the son of William Hay Whillans (Scotland) and Alice Ellen Whillans (Irish), of Pine Lake, Alberta. His bothers were James, Kenneth. Louis and Wilfred Whillans and his sister was Joyce Whillans.
He was a farmer and member of the Roman Catholic Church. He liked to do mechanical repairs, baseball, hockey and enjoyed hunting, fishing, trapping and reading fiction.
He enlisted on December 4 1943 in Calgary and he went overseas to the UK on June 2 1944 and he went thereafter on July 10 to France.
George was killed in action on Tuesday August 15 age 19 in the A Coy near Falaise and he was temporarily buried 2 km’s East of Soulangy and reburied on May 17 1945 in Bretteville S/Laize.
At his headstone: IN CHRIST SHALL ALL BE MADE ALIVE” HE IS OUR HOPE
His medals were: 1939-45 Star; France Germany Star; War Medal; CVSM & Clasp. 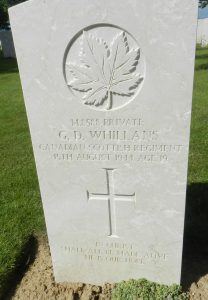