George was born on October 17, 1923 in Fort Langley, British Columbia as the son of James (Scottish) and Kathleen Mabel (English) Hadden, of Fort Langley. His parents were married on March 10 1923 here. He was the brother of Rifleman James William Dunbar Hadden, who died on July 19 1944 age 19 (born on October 22 1924) while serving with the Royal Regina Rifles Regiment. He is also buried in plot 14-F-14 in Beny S/Mer. Note the age of both brothers is wrong written at their headstones because George was 20 years (not 19) and James was 19 and not 20 years. His other brother was Benjamin Marr Hadden and his sisters were Birnie, Gloria Annie and Joyce Syphia Hadden.
His profession was a fisherman and he was member of the Presbyterian Church.
He enlisted on November 23 1942 in Vancouver and he went overseas to the UK on May 22 1943 and he went thereafter on Tuesday June 6 1944 to France for the landing on D-Day.
George was killed in action on Saturday June 10 age 20 in the B Coy near Putot en Bessin and he was temporarily buried there somewhere and he was reburied on May 3 1945 in Beny S/Mer.
At his headstone: EVER REMEMBERED BY MUM, DAD, BIRNIE, GLORIA, JOYCE AND MARR
And his medals were:1939-45 Star; France Germany Star; Defence Medal; War Medal; CVSM & Clasp. 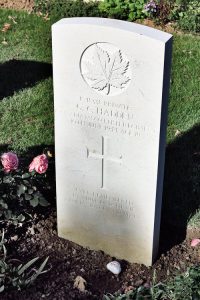