George was born on September 21 1916 in Yorkton Saskatchewan as the son of Mr. and Mrs. Collins (both deceased). He was the youngest of 6 siblings and he was after the death of his mother at the age of four placed in an orphanage and thereafter raised up by his father till his death at the age of 9 of George . And he was after that further raised up till fourteen by his sister and then again placed in an orphanage for three years.
His sister Helen Collins of Toronto was his next of kin and his friend and buddy in the army was Robert Reisig of Chilliwack British Columbia.
He was a labourer and member of the United Church. He liked picture shows , swimming, billiards, poker and a little boxing.
He enlisted on January 8 1940 in Regina Saskatchewan and he went overseas to the UK on February 8 1940 and he went thereafter on December 31 1944 to NW Europe.
George was killed in action on Friday April 27 1945 age 28 in the D Coy near the Leda River during the battle of Leer (Germany) and he was temporarily buried in Ihrhove (Germany) and reburied on March 12 1946 in Holten. His grave was thereafter adopted by a family of Deventer.
His medals were: 1939-45 Star; France Germany Star; Defence Medal; War Medal; CVSM & Clasp. 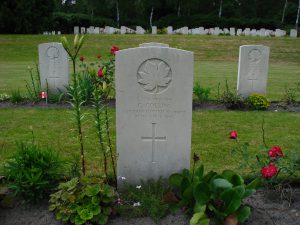