George was born on July 1 1925 in Swan River Manitoba as the son of William George and Effie May Howe, of North Vancouver. They were married on April 25 1906 in Vancouver. His brothers were William B. , David John (also overseas in the army), Ronald Clifford and Andrew Sydney Howe (deceased in 1920). His sisters were Mrs. Connie Sigurdsson, Mrs. Mildred Fossett and Viola May Howe.
He was a deckhand/sawmill worker and member of the United Church. He played chiefly hockey and enjoyed shows, swimming, fishing and read a little.
He enlisted on November 12 1943 in Vancouver and he went on July 19 1944 overseas to the UK and he went thereafter on August 13 to France.
George was killed in action on Wednesday March 28 age 19 in the D Coy near Emmerich Germany during the battle of the Rhineland. And he was temporarily buried in Vrasselt Germany and he was then on February 13 1946 reburied in Groesbeek.
At his headstone: SERVANT OF GOD, WELL DONE. THE BATTLE’S FOUGHT , THE RACE IS WON. REST IN PEACE
His medals were: 1939-45 Star; France Germany Star; War Medal; CVSM & Clasp. 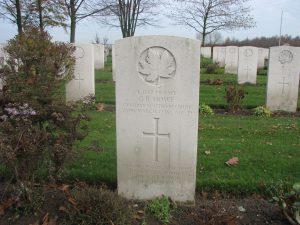