Geoffrey Blaney was born on March 11 1922 in Invermere BC as the son of Sydney Randolph (English) and May Dickie Blaney (Scotch) of Victoria British Columbia. They were married on July 14 1916 in Victoria.
He had four brothers: Sydney Arthur, Allan, also overseas in the same regiment as Geoffrey, Frederick, Ernest and an invalid sister Patricia (or Mochta Maud?) Blaney.
His profession was a mechanic and of he was member of the Church of England. And his hobbies were Canadian football, hockey, lacrosse, baseball, amateur boxing, reading and fishing.
He enlisted on May 1 1942 in Victoria and he did not like to go overseas like his brother Allan. He embarked the UK on June 2 1944.
Geoffrey was with the C Coy of the Canadian Scottish Regiment in the first wave at the landing on June 6 1944 in Normandy.
After that he was killed in action on Sunday June 18 1944 age 22 under attack by German artillery in the garden outside a farmhouse near Rots and West of Caen (France). He was temporarily buried the next day near Le Hamel and reburied at Beny s/Mer at February 5 1945. And from 1946 a French family started tending his grave till now.

At his headstone: The earthly remains Of our dearly loved son; His spirit is with us always 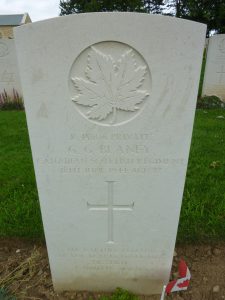