Geoffrey was born on July 20 1925 in Vancouver as the son of Henry and E. Lily Ohr (both English), of Vancouver. His parents were married on October 24 1920 in North Battleford Saskatchewan. His brothers were John Henry and Gerald George Ohr and his sisters were Gladys Joyce Forgie and Constance Lily, Helene Pearl and Marion Edith Ohr.
He was a construction helper and member of the United Church.
He enlisted on October 21 1943 in Vancouver and he went overseas to the UK on December 9 1944 and he went thereafter on February 12 1945 to NW Europe.
Geoffrey died of wounds on Saturday April 28 age 19 in the D Coy near the Leda River during the battle of Leer (Germany) and he was temporarily buried in Wettringen (Germany) and reburied on April 15 1946 in Holten.
At his headstone: LOVED AND LONGED FOR ALWAYS BY DAD AND MOM, TWO BROTHERS AND FOUR SISTERS
His medals were: 1939-45 Star; France Germany Star; War Medal; CVSM & Clasp. 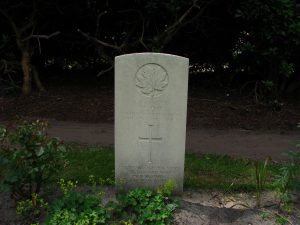