Fred was born on 31 Jul 1906 in St Gallen in Switzerland, as the son of Albrecht and Susette Wirth (deceased), of St. Gallen. His fiancee was Alice Lancaster. His brother was Hans Wirth in Switzerland and two other brothers  Albrecht and Ernest Wirth died already earlier in Switzerland. His sisters of Switzerland were Mrs. Susi Shiesser-nee Wirth and Mrs. Frieda Stark nee Wirth. His friend Ernest Keller of Cranbrook British Columbia was his executor. He was member of the Presbyterian Church and spoke English, German and read well French.

Fred was killed in action on Saturday April 21 1945 age 38. He was temporarily buried in Siddeburen and on February 15 1946 reburied in Holten. A family of Almelo adopted his grave after the war. 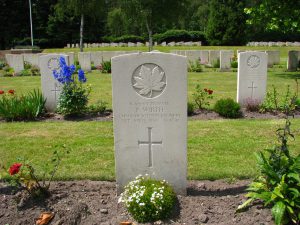