Fred was born on February 14 1918 in Smoky Lake Alberta as the son of Wasyl A. and Annie Makowichuk, both Ukrainian, of Smoky Lake. His brothers were: Nick, John, James and Alex Makowichuk and his sister was: Stephania Wolansky.
His profession was a farmer with his father and he was member of the Greek Orthodox Church. He spoke English and Ukrainian fluently. His interests were: he played a little baseball and liked movies.
He enlisted on November 25 1942 in Edmonton and he went overseas to the UK on March 29 1943 and he went thereafter to France on June 6 1944 for the D-Day landing.
Fred died of wounds on Sunday July 9 age 26 in the B Coy near Cussy and he was reburied on November 10 in La Delivrande.
His medals were: 1939-45 Star; France Germany Star; Defence Medal; War Medal; CVSM & Clasp. 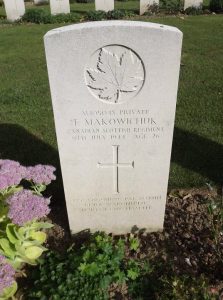