Frank was born on April 27 1923 in Prince Albert Saskatchewan as the son of Walter Edgar and Marie Helen Halliday. They were married on May 29 1916 in Prince Albert. His brothers were Lawrence Harry Edgar, Allan Clifford Douglas and Ashley Donald Thomas Halliday. His sisters were Pearl Elizabeth Svensson (living in Sweden), Marie Gertrude Masson, Emily Evelyn McIntosh and Lillian Ruby Edna, Patricia Lucille Shelia, Buelah Audrey Helen, Doreen Viola Genevieve and Donna Irish Yvonne Halliday.
He was a bush worker and member of the Church of England.
He enlisted on March 2 1942 in Saskatoon Saskatchewan and he went on December 31 1944 overseas to the UK and he went thereafter on February 12 1945 to NW Europe.
Frank was killed in action on Wednesday March 28 age 20 in the B Coy near Emmerich Germany during the battle of the Rhineland. And he was temporarily buried in Vrasselt Germany and he was then on February 13 1946 reburied in Groesbeek.
His medals were: 1939-45 Star; France Germany Star; War Medal; CVSM & Clasp. 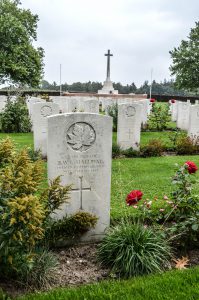