Frank was born on May 29 1922 in Madasca Hungary as the son of Andrew and Eva Papp (deceased), both Hungarians, of Abbotsford, British Columbia. He had two brothers: Andrew Papp and Louis Papp was overseas in the army in France too. His sister was Julia Papp.
He came to Canada in 1929 age 7 and his father was naturalized on December 28 1939 in Ottawa.
His profession was a truck driver and he was member of the Presbyterian Church. His sports were: baseball and boxing. And he liked reading westerns and detectives and he played mouth organ and accordion, and he liked shows and dancing.
He enlisted on September 23 1943 in Vancouver and he went overseas to the UK on May 7 1944 and he went thereafter on June 9 as reinforcement to France.
Frank was killed in action in the A Coy on Tuesday July 11 1944 age 22 during the battle of Caen. And he was temporarily buried near the chapel and wall in convent grounds in Caen and he was reburied on September 13 1945 in Bretteville S/Laize.
At his headstone: WE KEEP IN MEMORY THE LOVE OF THE PAST DEEP IN OUR HEARTS IT WAS PLANTED TO LAST
His medals were: 1939-45 Star; France Germany Star; War Medal; CVSM & Clasp. 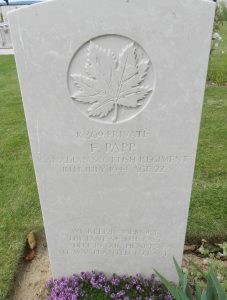