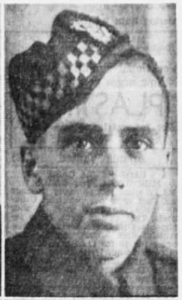 Frank was born on March 3 1915 in Balleyclare Ireland as the son of Frank Blair (deceased) , and of Annie Blair, of Mannville, Alberta. His brother was W.M.G. Blair and his sisters were Mrs. P. Roberts, Mrs. Lorne McCauley, Mrs. Pete Thielade and Mrs. Frank McCauley.
He was a truck driver and member of the United Church.
He enlisted on June 25 1941 in Calgary and he went overseas to the UK on December 23 1941 and he went thereafter as reinforcement on June 10 to France.
Frank died of wounds on Tuesday August 15 age 29 and he was temporarily buried near the townhall of Olendon and reburied on May 16 1945 in Bretteville S/Laize. He died during the  battle for Hill 68 near Soignolles alongside his friend L/Cpl Frank Barton who is buried at the Beny S/Mer Canadian War Cemetery grave 14-H-13.
At his headstone: GONE TO BE WITH CHRIST WHICH IS FAR BETTER
His medals were: 1939-45 Star; France Germany Star; Defence Medal War Medal; CVSM & Clasp. 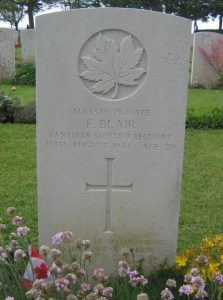