Eugene was born on September 29 1918 in Whiteburn Nova Scotia as the son of George and Mary (deceased) McBride, of Caledonia, Queen’s Co., Nova Scotia. His parents were married on July 15 1904 in Elk Brook Yarmouth County Nova Scotia. His brothers were Horace, Bernard, Walter, William, Everett and Robert McBride (also overseas in the army). And his sisters were Mrs. Gertrude V. Lewis and Mrs. Patricia Hirtle.
He was a lumberman and member of the Roman Catholic Church. He liked to play softball.
He enlisted July 23 1940 in Halifax Nova Scotia and he went on May 7 1944 overseas to the UK and he went thereafter on September 8 to France
Eugene was killed in action on Wednesday November 1 1944 age 26 in the A Coy near the Breskens Pocket and the Scheldt in Holland and he was temporarily buried in Maldegem and reburied on July 24 1945 in Adegem.
At his headstone: IN LOVING MEMORY OF MY SON EUGENE
His medals were: 1939-45 Star; France Germany Star; War Medal; CVSM & Clasp. 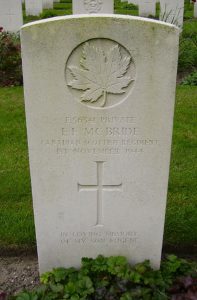