Eric was born on June 15 1918 in Bundaberg Australia as the son of Edith Hansen (both Danish), and he was the stepson of Ejner Pedersen, of Chilliwack, British Columbia. His parents were married on March 1 1913 in Calgary and were in the meantime divorced. His brother was Danny Hansen (overseas in the army too) and his sisters were Mrs. Clifford Laughlin and Mrs. Leslie Le Couteur.
His profession was a truck driver and he was member of the Lutheran Church.
He enlisted on August 14 1940 in Vancouver and he went overseas to the UK on March 1 1941 and thereafter to Belgium on October 17 1944.
Eric was wounded on October 28 and was killed in action thereafter  on Friday February 9 1945 age 25 in the D Coy during the battle of the Rhineland. And he was temporarily buried in Nijmegen and on August 6 1945 reburied in Groesbeek.
At his headstone: REST IN PEACE, DEAR ERIC, OUR LOVING SON AND BROTHER. PROUDLY AND EVER REMEMBERED
His medals were: 1939-45 Star; France Germany Star; War Medal; CVSM & Clasp. 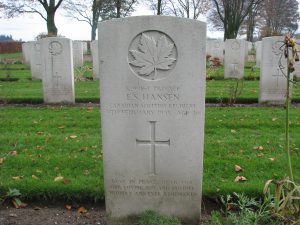