Eldon was born on January 18 1916 in Fredericton New Brunswick as the son of John Leslie (deceased in 1925) and Lena Arden Wood (deceased in 1919) Nason. They were married in August 1912 in Fredericton. He was married on October 19 1941 in Lethbridge Alberta with Annie Marie Nason of Lethbridge. And their son was Gerald Eldon Nason. His sisters were Ms. Effie Nason (born in 1919 and deceased in 1928), Mrs. Ruth Christina Needles and Ms. Dorothy Nason (born in 1918 and deceased in 1928).
His profession was a carpenter and he was member of the United Church of Canada. His interests were reading and shows and he had done some boxing.
He enlisted on November 26 1942 in Edmonton and he went overseas to the UK on May 7 1944 and he went thereafter on June 13 1944 as reinforcement to France.
Eldon died of wounds on Saturday July 1 age 28 due to a mine accident near Rots le Hamel and he was temporarily buried in le Hamel and he was reburied on February 5 1945 in Beny S/Mer.
At his headstone: MAY GOD BLESS HIM AND KEEP HIM AND MAY HE REST IN PEACE 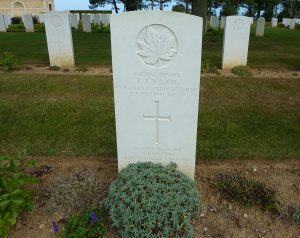