Edwin was born on January 16, 1922 in Victoria, British Columbia as the son of Edwin H. W. and Eunice Jane Boothby, of Victoria. His parents were married on October 1 1919 in Pheasant Valley Alberta.
His brothers were L.H. Boothby (in the army too), Arthur W. and George A. Boothby. His sisters Eva Bessie and Grace Boothby died very young.
The profession of Edwin was a factory worker after attending Victoria High School at the Victoria Bed and Mattress factory and he was member of the Anglican Church.
He enlisted on July 4 1940 in Victoria and he went overseas to the UK on September 2 1941 and he went thereafter to France on Tuesday June 6 1944 for the D-day Landing.
Edwin was killed in action on the same day age 22  and he was temporarily buried in St Croix Graye S/Mer and he was on February 16 1945 reburied in Beny S/Mer.
At his headstone: GREATER LOVE HATH NO MAN THAN THIS, THAT A MAN LAY DOWN HIS LIFE FOR HIS FRIENDS 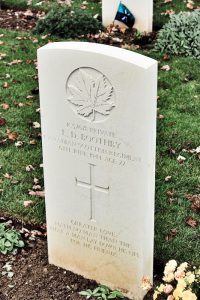