Edward was born on August 24, 1923 in North Vancouver as the son of Chené Mari Ange (deceased), and of Alphonsine Ange, of Northlands, British Columbia. His parents were married on December 4 1913 in North Vancouver. His mother remarried with Leslie Virag and he was his stepfather too. His brother Oliver Ange was overseas in the army too and his half-brother was Leslie Virag and half-sister Margaret Virag.
His profession was a labourer and he was member of the Roman Catholic Church. He played softball and soccer and his hobby was woodcarving. And he liked in his spare time music, shows parties etc. and he did not read much.
He enlisted on October 26 1942 in Vancouver and he went overseas to the UK on September 1 1943 and he went thereafter to France on June 6 1944 for the D-Day landing.
Edward was killed in action on Tuesday July 25 age 20 in the A Coy near Caen and he was reburied on April 23 1945 in Beny S/Mer.
At his headstone: MAY THE SOULS OF THE FAITHFUL DEPARTED THROUGH THE MERCY OF GOD REST IN PEACE
And his medals were: 1939-45 Star; France Germany Star; War Medal; CVSM & Clasp. 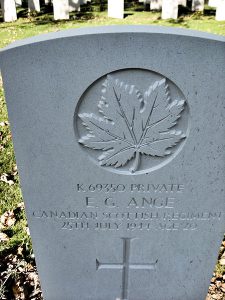