Douglas was born on August 26 1916 in Barnsley England as the son of John and Rhoda Etherington, of Cumberland, British Columbia. He was married on November 26 1939 with Marian Murry Etherington in Nanaimo British Columbia. His brothers were Norman, John, Harry and W.M. Etherington(overseas too).
His profession was a miner and he was member of the Church of England.
He enlisted on March 5 1941 in Victoria British Columbia and he went overseas to the UK on September 2 1941 and he went thereafter to France on Tuesday June 6 1944 during the D-Day landing.
August was killed in action on Friday June 9 age 27 in the A Coy near Putot en Bessin and he was temporarily buried there and he was reburied on February 1 1945 in Beny S/Mer.
At his headstone: IN MEMORY WE SHALL ALWAYS KEEP HIM. MOTHER AND FATHER, BROTHERS AND SISTERS
And his medals were:1939-45 Star; France Germany Star; Defence Medal; War Medal; CVSM & Clasp. 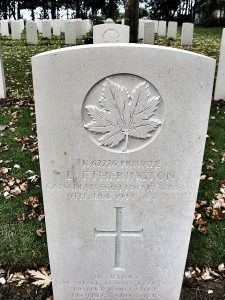