Desmond was born on December 1 1922 in Vancouver as the son of Thomas Bernard and Margaret Reynolds (both Scottish), of Vancouver. They were married on October 18 1918 in Scotland. His brother was William Reynolds (in the navy and also overseas too) and his sister was Margaret Snow.
He was a labourer and member of the Roman Catholic Church. He liked football and baseball and to go to shows, movies, beer parlors and he swam occasionally and read fiction, detective and western magazines.
He enlisted on June 12 1944 in Vancouver and he went on December 9 overseas to the UK and he went thereafter on February 12 1945 to NW Europe. He had been in the Navy as a stoker before and he was discharged then of other than medical reasons and he did not like it there.
Desmond died of wounds on Thursday March 30 1945 age 22 in the A Coy near Emmerich Germany during the battle of the Rhineland and he was temporarily buried in Vrasselt Germany and he was then on February 13 1946 reburied in Groesbeek.
At his headstone: IN LOVING MEMORY OF DESMOND, OUR BELOVED SON AND BROTHER. R.I.P
His medals were: 1939-45 Star; France Germany Star; War Medal; CVSM & Clasp. 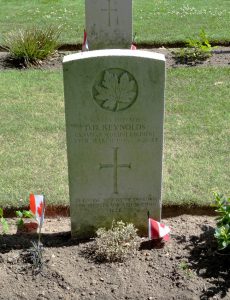