Delmer was born on September 12 1920 in Alexandria Ontario as the son of Philippe and Sophia Quenneville nee Leroux. His brothers were Marcel and Aldege Quenneville and his sisters were Mrs. Jean Boileau, Gloria and Amerilda Quenneville (and both already deceased).
He was a clerk and member of the Roman Catholic Church. He spoke English and French.
He enlisted on August 3 1942 in Vernon British Columbia and he went overseas to the UK on September 1 1943 and he went thereafter on June 6 1944 as reinforcement to France for the D-Day landing.
Delmer was killed in action on Saturday July 8 age 23 in the C Coy near Cussy and he was temporarily buried there and he was reburied on February 7 1945 in Beny S/Mer.
And his medals were: 1939-45 Star; France Germany Star; War Medal; CVSM & Clasp. 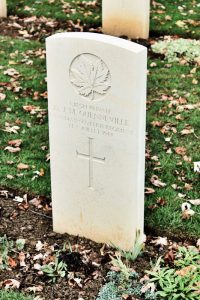