Daniel was born on August 14 1923 in Red Deer Alberta as the son of Adolph (Russian) and Minnie Domke (Austrian), of Camp Lister, British Columbia. His brothers were: Theodore, Edward Rudolph and Eric Douglas Domke and his sisters were: Mrs. Clara Young, Mrs. Martha Willard and Mary and Eva Domke.
His profession was a logger and he was member of the Lutheran Church (OD)
He enlisted on November 16 1942 in Vancouver and he went overseas to the UK on June 24 1943.
Daniel took part of the landing in Normandy on June 6 1944 and he was thereafter killed in action in the D Coy on Friday August 11 1944 age 20 near Falaise. And he was temporarily buried in Mondeville and on April 19 1945 reburied in Bretteville S/Laize.
At his headstone: NOT DEAD BUT SLEEPING, NOT LOST BUT GONE BEFORE, WAITING FOR THOSE WHO LOVED HIM
His Medals were: 1939-45 Star; France Germany Star; Defence Medal; War Medal; CVSM & Clasp. 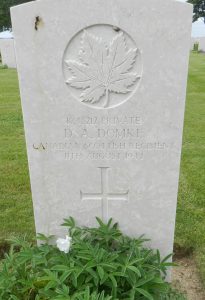