Clifford was born on January 16 1919 in Halifax Nova Scotia as the son of Stanley Samuel (deceased in 1940) and Carolina Georgina Williams. They were married on August 30 1916 in Tufst Cove Nova Scotia. He was married on February 2 1940 in Pereau Nova Scotia with Edna May Williams, of Canning, King’s Co., Nova Scotia and their children were Carl Raymond, Sandra Lee and Dorothy Marie Williams. His brothers James A. (1922) and Stanley K. Williams (1931) were already deceased earlier.
He was a labourer and member of the Church of England. He read quite a bit, general, novels, non-fiction and current history, mostly of better class. He liked swimming and skating and the chief sports were hunting and fishing. And he also liked to tinker with automobiles and was mechanically minded.
He enlisted on October 4 1939 in Dartmouth Nova Scotia and he went on July 19 1944 overseas to the UK and he went thereafter on October 7 to France.
Clifford was missed in action on Wednesday December 20 1944 age 25 in the C Coy at the Waal flats near Nijmegen.
His medals were: 39-45 Medal; France Germany Medal; CVSM & Clasp; War Medal. 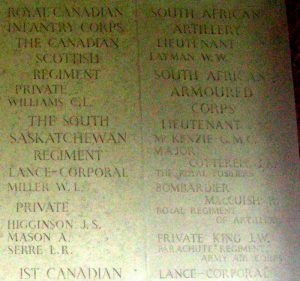