Clayton was born on June 9 1919 in Moose Jaw Saskatchewan as the son of David William (Scottish) and Ella May Evans (Welsh), of Notikewin, Alberta. His brothers were: Charles, Archie, Floyd and Francis Evans.
He was a farm hand with his parents and he was member of the United Church of Canada.
He enlisted on June 28 1940 in Peace River, Alberta and he went overseas to the UK on August 24 1941.
Clayton was killed in action on Tuesday June 6 1944 age 24 in the first wave in the C Coy during the D-Day landing. He was temporarily buried in Vaux near Graye s/Mer and reburied on August 9 1945 in Ryes.
At his headstone: EVER REMEMBERED EVER LOVED
His medals were: 1939-45 Star; France Germany Star; Defence Medal; War Medal; CVSM & Clasp. 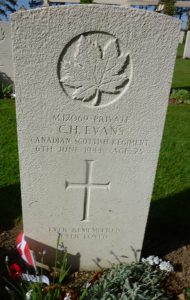