Charles was born on July 18 1922 in Winnipeg as the son of Walter and Florence Anne Cornwell (both English), of St. James, Manitoba. His parents were married on October 21 1917 in London England. His brother was Jack Cornwell and his sister Mrs. Evelyn Florence Pearn.
His profession was a store clerk and he was member of the Church of England.
He enlisted on November 10 1942 in Winnipeg and he went overseas to the UK on May 22 1943 and he went thereafter in the A Coy on Tuesday June 6 1944 to France for the landing on D-Day.
Charles died of severely wounds due to this landing on Friday June 9 age 21  and he was temporarily buried thereafter in Graye S/Mer and he was reburied on December 11 1944 in Beny S/Mer.
At his headstone: IN MEMORY OF A DEAR SON AND BROTHER AS WE LOVED, SO WE MISS HIM. MUM, DAD AND FAMILY
And his medals were:1939-45 Star; France Germany Star; Defence Medal; War Medal; CVSM & Clasp. 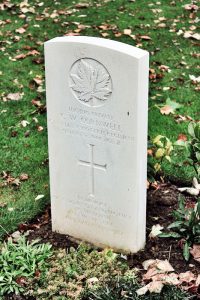